Who will not be amazed at the richness of the Syriac music and who will not be delighted with the flavour of its antiquity? Who will not rejoice in thanksgiving at the beauty of its melodious variety? Across the waves of the centuries and from the magnificent sanctuaries of churches and monasteries in that sacred land of our forbearers, we hear the echoes of its melodious 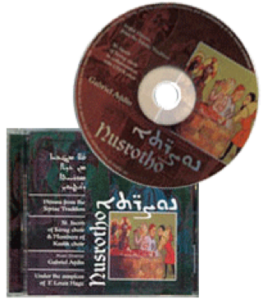 chants coming sweetly to our ears. In “Nusrotho” Gabriel Aydin, the founder and director of the Syriac Music Institute, is producing some liturgical hymns and songs taken from the Beth Gazo (the Treasury of chants) and other liturgical books together with some newly arranged and composed songs.

“Nusrotho” consists of selection of unique pieces from the Syriac liturgical tradition. Gabriel Aydin selected hymns that have distinct musical features and characteristics in terms of their melody, tune, rhythm and scale, as well as their place within the Syriac liturgical services. For example, “Mor Dalon” is a unique hymn. It has a wonderful melody, which carries within it some of the most characteristic features of the Syriac Music.

“Nusrotho” is a combination of choir and solo songs. Even it is a mixture of antique and modern music. “Bnahlo dYoushofot” with deacon Youssef Afram takes the listener to the magical mountain of Tur Abdin, while “Yeshou´” and “Óbouraw Kulmedem” of Abir Nehme gives the listener the mysterious fragrant of a new Syriac music derived from the ancient melodies of the Syriac Church music.

“Nusrotho” is performed by the members of St. Jacob of Serug Choir in collaboration with The Holy Spirit University of Kaslik Choir. It also has the non-forgettable touch of Rev. Georges Safar (‘Ewardnoyo) and Lena Farah.

Ten uninterrupted times of listening to “Nusrotho” is not enough, because in every time you will find a new and tastier flavour of the Syriac Sacred Music.

There are no upcoming events at this time.