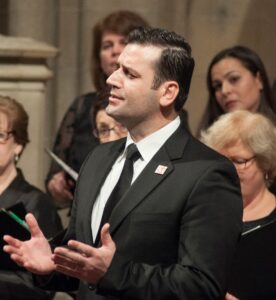 Gabriel Aydin was born and raised in Tur‛Abdin, southeastern Turkey, where he was trained in the Syriac chant tradition of the Syriac Orthodox Church. He obtained his first education in Syriac culture, classical Syriac, liturgy, and liturgical music in his home parish of Mor Abrohom and advanced his chanting skills and liturgical music repertory by attending both Deyr Al-Za‛faran (Mardin) and Mor Gabriel (Midyat) seminaries in Tur‛Abdin for eight years.

Later, he familiarized himself with the various chant traditions of the Syriac Church while doing his Master’s thesis analyzing the complete chant tradition of Edessa (modern-day Urfa) and his Diplôme D'études Approfondies (Diploma of Profound Studies) thesis on the chant tradition of Mardin at the Holy Spirit University of Kaslik (USEK), Lebanon. He graduated from Yale Institute of Sacred Music with Master’s degree in Art and Religion. In 2020, he received his doctorate in musicology with a special focus on Syriac chant at the Holy Spirit University of Kaslik (USEK) in Lebanon. His dissertation, “The Lineage of Zmirotho Dʽito: A Comparative Transcription and Musical Analysis of Syriac Liturgical Chant according to the Rite of the Syriac Orthodox Church of Antioch,” examines the last century’s major hymnal of the Syriac Orthodox Church from the perspectives of history, formation, practice, musical transcription, and fidelity to the tmoné qinotho (eight modes).

In 2007 he founded the Syriac Music Institute in Rhode Island, United States that promotes the preservation and growth of the ancient Syriac sacred music tradition. He published The Syriac Hymnal in 2018 which features traditional hymns from the Beth Gazo, for every feast and occasion according to the Syriac annual liturgical calendar.  All hymns are prepared in Syriac text, Latin transliteration, English translation, and musical notation with special musical symbols that convey pitches, tones, and melodic forms unique to Syriac music.

Currently, he is a visiting lecturer at the University of Salzburg teaching Syriac Prosody and Liturgical Music in the Master of Arts in Syriac Theology.